When I graduated University, I didn’t have a job. I spent days submitting my resume into the abyss and nights building a mobile app.

As you read this, please picture a 20 year old accountant looking for a job in finance.

The writing is not great. I didn’t edit any of this.

Why build an iOS app?

In late September of 2014, I moved home from Waterloo. I had nothing to do between job interviews, so I subscribed to Treehouse, a service offering tutorials on different programming languages.

After I moved through HTML/CSS/Javascript, I started the Swift iOS module on the advice of a good friend. After creating my first weather app, I decided to instead work on a real world problem to try and motivate myself to really try to learn programming.

As you read through the reflection, the many arbitrary conclusions driven by the lack of research and validation will seem arrogant and may be hard to stomach for some readers. However, I hope my ability to solve problems and willingness work through something challenging comes through.

It wasn’t easy for someone who spent 5 years of university memorizing the nuances of financial reporting to grasp all of this. The curiosity to learn and the confidence in my ability to do so started here with this app.

As I write this in 2014, if I end up doing something cool in the next 5 years of my life I attribute it to a wonderful course I took in grade 12 and the first app I developed: fitZilla.

As a co-op student working in downtown Toronto, moving every few months was something I got used to. Come the end of every term, I would pack up my room and haul everything from Waterloo to Toronto and back again.

Except for losing a few plates, some pens and a 12 year old microwave, the move was relatively painless.

But, as I got more into fitness, getting a gym membership started to become a pain. Having had a membership at GoodLife, I had a couple problems:

With these issues in mind, I wanted to allow people to sign up for daily memberships for a low price.

Remove the hassle of wading through annoying sales staff and offer people the flexibility to go to the gym when they wanted to.

The idea was to create an app where users could easily purchase day passes to gyms across the city through their phones.

Though this was a solution to my own problem, I felt like the service solved a few key problems in the fitness industry (some previously mentioned):

Problem - Memberships are expensive and contract terms are too long

Commitment is difficult, especially for someone’s first visit to a gym.

In addition to my own problem, a larger issue is the barrier to entry into the fitness space for the average individual.

Talking to friends and from my own experience, I can say that joining a gym is scary. For a person that’s never done a squat or fumbled with the buttons on a treadmill, walking into a room with muscled men judging your every move is not an easy feat.

To add to this, gyms usually have a personal trainer walk a potential member through all the areas of the gym, often making them do a fitness assessment at the end of the visit.

Personally I would rather walk in with a friend I knew well and walk through at my own pace.

Give small box gyms a larger voice - it’s no secret that Goodlife and LA Fitness has Toronto locked down in a pseudo monopoly. Smaller box gyms often struggle to remain profitable, most making the switch to scheduled lessons with higher premiums for personalized service in an effort to compete (this is where ClassPass comes in).

My app could allow smaller gyms to reach out to a market of short term gym goers and the mass of Torontonians who do not want to commit to a long term membership.

As a $3B dollar industry in Canada growing at 2.1% a year, expected to grow at over 4% through to 2018 (business person inside talking), I was excited to create a solution people might actually use!

I began to fumble my way through…

Before we dive into the specifics of the app, a quick graph to provide context of the struggle I was about to face. Having not programmed anything substantial since Grade 12 (6 years ago), the highs were inflated by false confidence and the lows deepened by the helplessness of a fresh grad without a job. 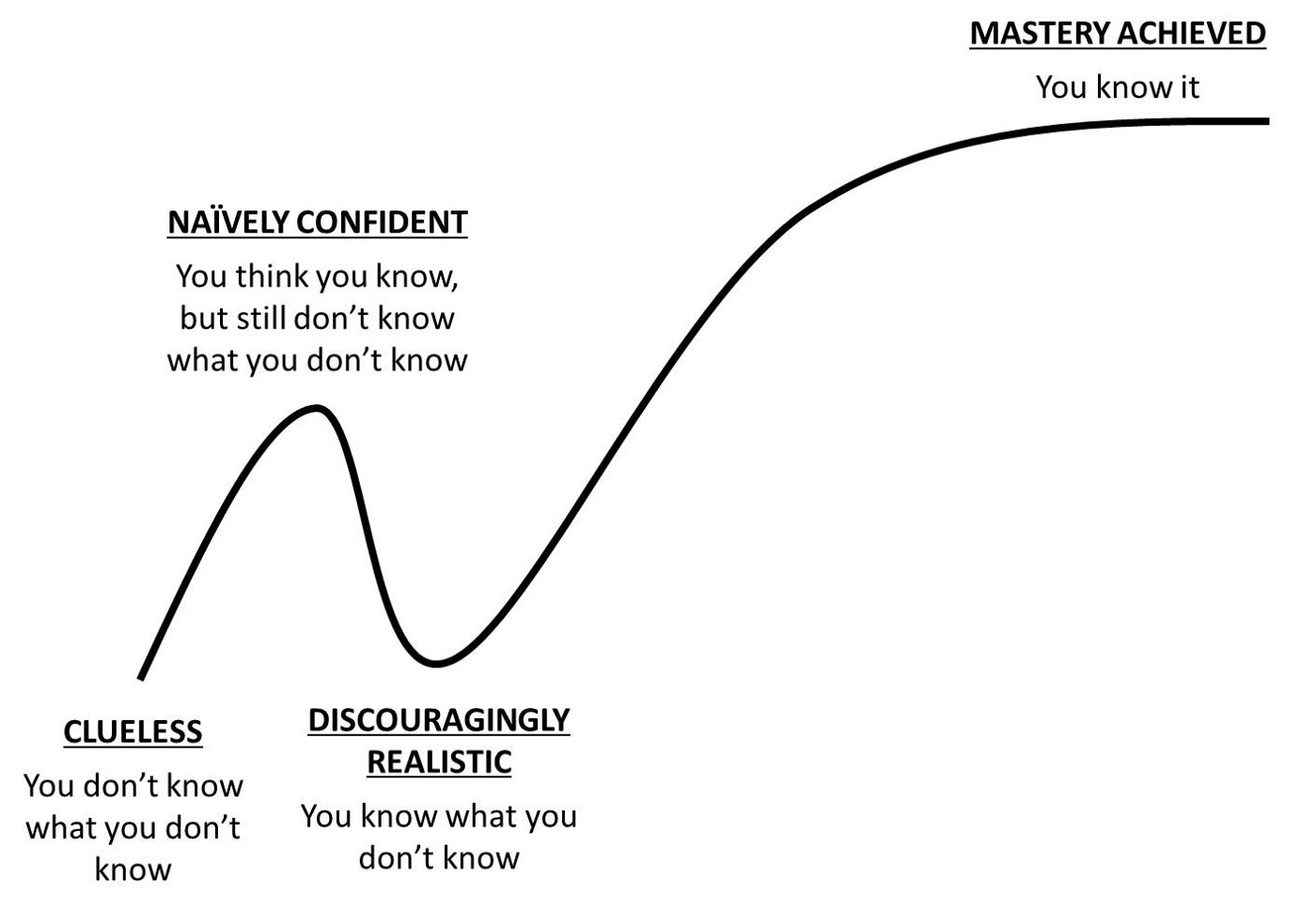 Unfortunately I lost all the screenshots when my squarespace subscription expired.

Wayback machine does not store images :(

Naturally the first screen the user would see, I first tackled the login screen.

My first taste of the “Naively Confident” stage of the learning curve was when I first set up x-code and completed the typical “Hello World”, after which I immediately descended to the “Discouragingly Realistic” phase for the rest of the week.

To keep myself from rambling I’ll use a more organized format to list what I learned as I worked through each module of my app.

Some takeaways I had:

In no particular order some of the things I’ve learned:

Since I got to this step, I’ve been speaking with countless gym owners around the city to get their input on the idea.

As for the app, the next steps are to make the merchant side app, to refine the actual layout of the different screens and to design the UI (part 2)!